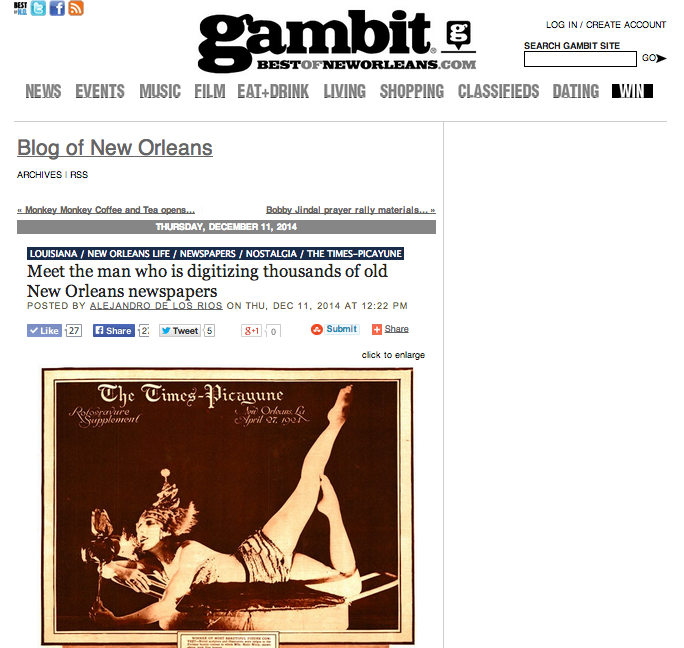 – "Anyone who's ever tried going through The Times-Picayune's newspaper archive knows that it can be frustrating and often tedious. The archived papers look like they were scanned with technology from the 1970s, and the archive's search feature is often inconsistent and can lead you down a rabbit hole of inaccurate results. For those who are doing research or are just fans of history, it can be an ordeal.

Thankfully, there is Joseph Makkos.

A writer and history buff, Makkos came across a collection of tens of thousands of old newspapers from 1885 to 1930 via a Craigslist ad. Now he's going about the tedious task of scanning and uploading the pages to his website, NOLADNA.com.

Makkos was profiled by Collector's Weekly in October and it's a great read. The article details how Makkos found the old newspapers and his motivation behind starting such an ambitious project:

“I really loved the craftsmanship of the books that were produced during the mimeograph revolution in the ‘60s and even earlier, the chapbook style of making books with French folds and letterpress covers,” says Makkos. “I really just fell in love with the printed word on the page.”

As the picture above shows, Makkos has already uploaded some beautiful scans. As you can probably guess, the challenge of scanning so many newspapers is both tedious and time-consuming, but anyone with a love for New Orleans history should show their thanks with a donation to Makko's website.