Let me first start out by saying that this blog post is super LATE, but it's an extended post, and actually a case study using the tools of Instagram and some real live analytic tracking. Note, this will be my final blogpost for the Spring 2020 semester - an odd semester that had to happen during an international health pandemic, for those of you who are paying attention.

So my main outlet for creativity right now is my camera. I've been covering the pandemic as a photojournalist for a local famed investigative journalism website Bayou Brief, run by Louisiana's favorite, quintessential modern muckracker, Lamar White.

I was compelled to do something related to my Emerging Media class in the Manship School of Journalism at LSU that was happening in REALTIME around the Covid-19 pandemic. My instinct was to grab my camera and become a documentarian, not necessarily my camera phone with intent to make posts for Instagram. But when I first got out onto the streets with my camera and some nice lenses and started taking pictures, I had no idea that I would be getting these published in Bayou Brief, let alone that some of them would go viral on social media. But I knew that the digital affordance that my keen eye and camera would provide me with a sense of composure, in my present moment, living in a relatively deserted French Quarter, a historic neighborhood that enjoys, literally millions of visitors each year - one of the most visited places in Louisiana, let alone the Southern region of the United States.

So here is the catch that we weren't expecting: because of the quarantine there has been a major dip in content creation by individual users. Another project would be to use instamancer to scrape for images of the French Quarter during the quarantine to consider how this dearth of generated content affects the content that IS being published via social media or even news sites.

This also lays the groundwork for a larger campaign, something more immediately sticky, in which I plan to bring some visually rich content to Instagram TV to promote all these efforts. Here is the most detailed blog post I could find that pretty much gives the entire history, scope, present and future for IGTV - which will be part of the future-forward mission. But let me first tell you how I got here.

See the past few weeks while we'd been dealing with this shit-show of a world pandemic, I've been doing a few longer trajectory projects that seem to now have a cross over into this class vis-a-vis Instagram. It has been a real eye-opening learning process, using new tools to track the progress of a campaign in real time. For me it is ok that these images were published a few weeks ago because they will still be new to Instagram as soon as they are published.

When Bayou Brief published the first piece: As the Coronavirus Pandemic Spreads, the French Quarter Empties. on March 27th at around 10pm. In the first hour of the article being released, an organization reached out to me and asked for a repost on their account, which earned it a single photo that was picked up by the New Orleans Jazz Museum and reposted in their own instagram. The first of the famed Preservation Hall. This metrics on this image were telling, as it gathered 354 likes and dozens of shares via FB.

Street photography is a good example of what can be considered organic content. It is unique, and original, and is attached to an aspect of the immediate community. It should also be noted that the NOJM is participating in transmedia storytelling via the combined effort of all their social media put together. NOJM has also been an early adopter, during this pandemic for rich, streaming online concerts, interviews, and other LIVE media.

And then the second story dropped, at the exact time people are used to seeing a rise in local tourism, yet Frenchman Street was a ghost town. The reactions are intense, as these images are certainly a play on people's emotions at the moment, something that makes Instagram sticky. While A Tale of Two Cities: New Orleans Under Quarantine was released on Saturday, April 11th, at around 1pm, the NOJM was craving a pre-release image, and so they ran this shot that generated over 700 likes in a matter of a day.

This time, with even more engagement via Facebook as well. Note: I mention FB because it is part of the connection of multiple social media being a force together, for a better mix of clicks, and engagements, which help understand what is successful and how the metrics help posts get shared with greater frequency.

The Jazz Museum was still so hungry for new visual content around music, that they ran yet another piece, as a preview of my third essay for for Bayou Brief: Staying Connected in Light of the Pandemic This time the likes and shares grew even more: to 1155 likes on IG, with a heightened level of engagement as well via Facebook.: 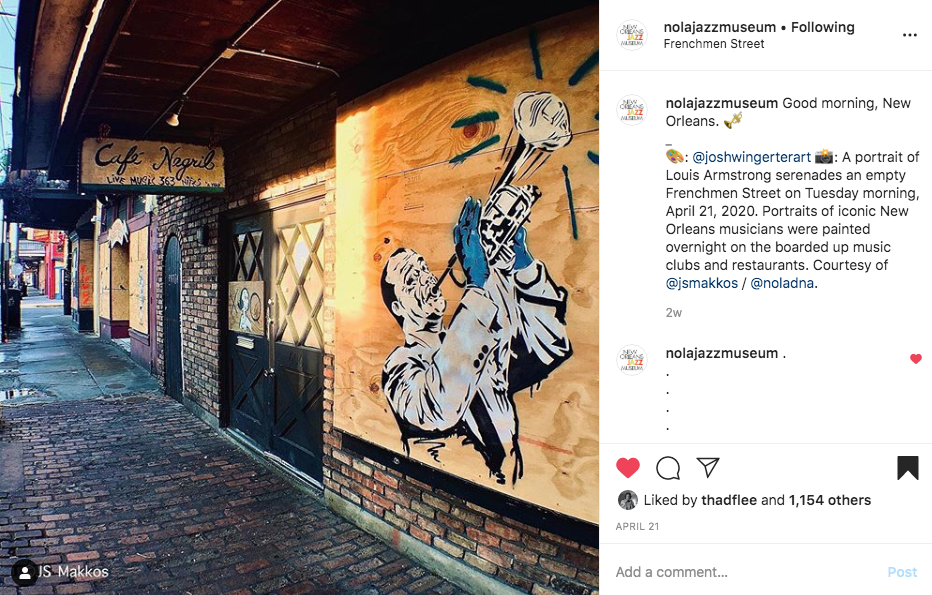 Here is another shot of mine that the NOJM ran late night on April 30th in honor of First Responders and Healthcare workers in Louisiana. Doesn't matter how many likes it get's but just that it's out there! The NOJM has requested a physical, archival print of this image for their offices, to document a specific moment in time.

So now this has become an ongoing project, and it has landed me an regular column in Bayou Brief as well as a retainer to provided regular content to the New Orleans Jazz Museum and has lead me into conversations with film producers who are interested in funding a documentary, using my photos and captured video footage as a starting point to further document the moment when music DOES return to the streets of the New Orleans and the French Quarter proper.